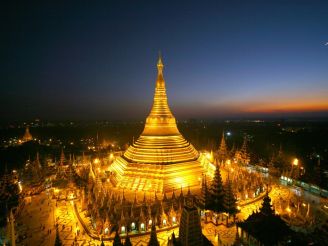 Shwedagon Pagoda is one of the major religious shrines of Myanmar, which is considered the most mysterious country. This state shares borders with China, Bangladesh, India, Thailand and Laos, cultures of which have been harmoniously intertwined and reflected in the national philosophy of the population of Myanmar.

The Golden Pagoda is an ensemble of domed constructions designed to share and celebrate the Buddha's teachings. They are considered national shrines. Ancient Buddhist texts are kept there. A pagoda has a kind of umbrella over, symbolising defence against rays of ignorance.

Shwedagon Pagoda is the world's only temple, where four greatest Buddhist relics are kept. The construction of the Golden Pagoda began within the lifetime of Buddha. Its contemporary height and shape were reached in 1774. Temple tops are notable for their flat, rectangular shape. The structure itself is situated on the extended platform, which rises above the plain area at an altitude of about twenty meters. Monasteries and hotels designed to accommodate the pilgrims are located around the temple. The platform can be climbed through four stairways, the largest of which consists of one hundred and seventy-five stair-steps, and the shortest is seventy-one stair-steps shorter. The entrances to the temple are adorned with richly decorated holy places, which crown multitier roofs.

The full length of the construction is sheathed with gold and decorated with two thousand semi-precious stones and five thousand diamonds. During the long years of its existence, Shwedagon has repeatedly suffered from the attacks of robbers who tried to steal its valuables.

Shwedagon Pagoda - this is one of the most important religious sites of Myanmar, which is considered the most mysterious country on the planet. This state is bordered by China, Bangladesh, India, Thailand and Laos, which harmoniously intertwined culture and reflected in the national outlook of the inhabitants of Myanmar.

Golden Stupa is a set of domes designed to share and celebrate the Buddha's teachings. They are considered a national shrine, which holds ancient Buddhist texts. At the top of stupas is a kind of umbrella symbolizing protection from the rays of ignorance and lack of knowledge.

Shwedagon is the world's only temple in which there are both four greatest Buddhist relics. Its construction began during the life of the Buddha. Modern church has reached a height of 1774. Then he found and their current silhouette. Temple tops are flat, rectangular shape. The structure itself is on the extended platform, which rises above the plain area at an altitude of about twenty meters. Surround the temple monasteries and hotels are designed to accommodate the pilgrims. Climb onto the platform can be in four stairs, the largest of which consists of one hundred and seventy-five degrees, and the shortest is the seventy-one notch lower. Adorn the entrances to the temple complex of richly decorated temple, which is crowned with tiered roof.

Construction of the full-length of his sheathed in gold leaf on which all sides are poured two thousand semi-precious stones, and five thousand diamonds. During the long years of its existence, the Shwedagon has repeatedly suffered from the attacks of robbers who tried to steal his many values. Unfortunately, some of his rarest items have been lost forever, but in general, golden stupa is preserved to this day in its original grandeur. It is believed that the Shwedagon is one of the most expensive buildings in the world, its facade is decorated with more than one thousand four hundred gold and silver bells. The top of the stupa is covered with gold leaf, the total weight of which is equal to five hundred pounds.

Among the most ancient elements Shwedagon include railings, appointed by the north entrance. They are made ​​of stone in the form of long crocodiles. Historians believe that the rails were made ​​in about 1460. The legendary history of this temple is carved in two languages ​​on three stone slabs set on the eastern stairs.

Incredible generosity and grace characterized the central part of the Shwedagon. Her crowning element was built in 1871. It consists of seven rings gilded and reaches a height of ten meters. Despite the fact that this architectural complex of the late 18th century was already fully prepared, its restructuring and repairs are still going on. In order to get to the temple, you must first climb the highest hill on top of which is a comfortable escalator.

Feedback
Your attention and time spent on the site IGotoWorld.com is greatly appreciated. If you have any questions, wishes, complaints, or you desire to learn more about us, select the area you are interested in and click the link to make a comment or ask a question.
Feedback form
Request submitted successfully.
Send